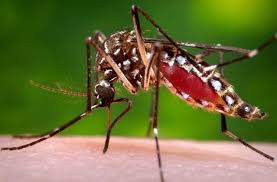 Researchers have actually discovered there to be over 3000 distinct mosquito species worldwide. Because of this amazing genetic diversity, mosquitoes have adapted to survive in conditions on every continent except Antarctica.

The 2 most important and abundant mosquito species are Aedes Vexans and Culex Pipiens.

Aedes Vexans is a floodwater mosquito that can quickly explode in population after heavy rainfall. This species lays single eggs on damp soil waiting for flooding; eggs can be viable for up to 5-7 years. Although known for painful and persistent blood feeding, this species transmits only dog heartworm but not any human diseases.

Culex Pipens is capable of transmitting West Nile Virus, Eastern Equine Encephalitis and other dangerous diseases. They are tolerant of a wide range of aquatic habitats including semi-permanent pools, catch basins, and artificial containers.

Culex mosquitoes thrive best in the hot, dryer conditions typically found in July, August, and September. They hibernate over winter as adults who seek shelter in buildings, sewers, sheds, and other protected areas.

So, just how does a mosquito go from egg to arm to welt?

Egg; Mosquitoes have adapted a range of egg laying techniques to accommodate a variety of aquatic habitats. One characteristic common to all mosquitoes is that they require standing water throughout the entire breeding cycle until they reach the adult stage. Eggs take 1-4 days to hatch into larvae, also called wigglers.

Larvae; The larval stage consists of four separate instars in which the mosquito progresses in development. During this stage the larvae actively feed on organic matter in the water and take in oxygen from a breathing tube. They hang from the water’s surface and can dive down into the water to avoid predators. Larvae take about 5-14 days to develop into pupae, depending mostly upon water temperature.

Papae; Papae, also called tumblers, is the final stage of aquatic growth. The mosquito stops feeding and begins its final maturation however, they are still very active and can dive in their characteristic tumbling motion. After 1-4 days the pupae emerges onto the water’s surface as an adult mosquitoes, rests briefly to harden, and flies away.

Adult; After hatching, many species will immediately mate. Male mosquitoes have a short life span, generally living only 1-3 weeks and feed off of plant sugars. Female mosquitoes seek a blood meal so that they can produce eggs. Female mosquitoes generally produce 1-4 batches of eggs during their lifespan. Some mosquito species, such as Culex Pipiens, overwinter as adults and can live for 6+ months.

Mosquitoes: More than just a nuisance

More than just simple pests, mosquitoes are blood-sucking transmitters of serious diseases. When many people think of dangerous creatures, bears or sharks often come to mind. However, despite its size, the mosquito is, by far, the world’s deadliest creature. Every year, 300-500 million people will contract malaria and approximately 2.5 million people will die as a result.

Here in the United States, we are generally less aware of the dangers of mosquitoes. We take great measures to control their population. Over 1,000 Americans will become seriously ill or die from a mosquito-borne illness, each year. Many more will experience a minor to moderate mosquito borne reaction. With less capable immune systems, children and the elderly are the most susceptible to many mosquito-borne diseases.

Mosquitoes are organisms that are capable of carrying and spreading diseases (vectors). These are some common diseases transmitted by the mosquito to humans and animals.

Our EPA registered barrier spray products are specifically designed to effectively control mosquitoes and ticks while posing minimum risk to people and pets. They have undergone extensive testing and have been proven effective.

Each application is backed by our free retreatment guarantee meaning that you can rest assured with being protected by the best.